This one-day workshop will include presentations from the City of Eugene, ODOT, local projects, and more! Lunch will be provided, and the event is followed by a happy hour at the Ninkasi Brewing Tasting Room just 2 blocks away! An optional hiking trip will take place Saturday morning to the summit of Spencer Butte. Registration closes June 7th! 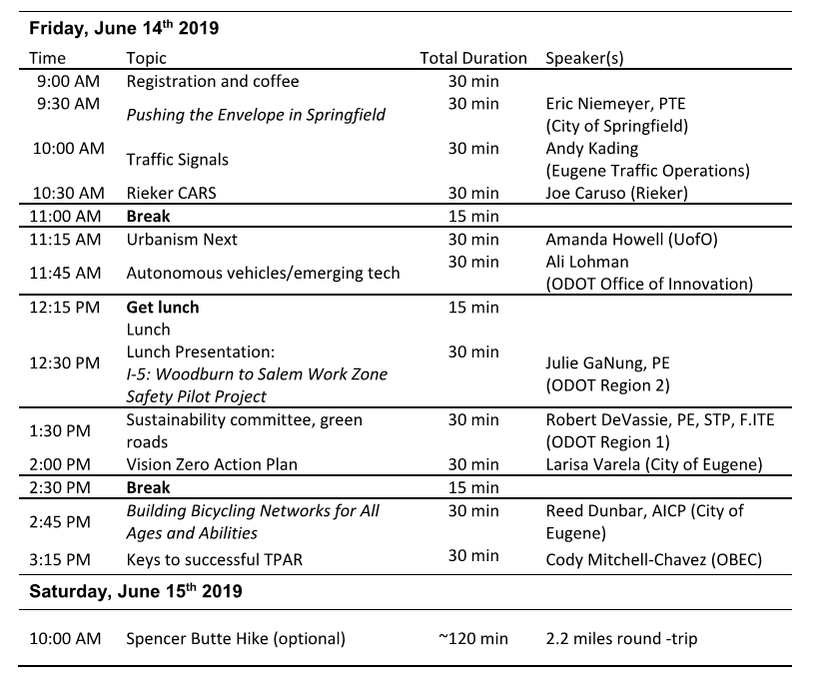 Background:
Near the confluence of the McKenzie and Willamette River at the southern end of the Willamette Valley and just 50 miles east of the scenic Oregon Coast…welcome to Eugene, Oregon, “A great city for the arts and outdoors”, Oregon’s 3rd most populous city, and the host, for the first time in the United States, of the 2021 Track and Field World Championships.

In 2007, Eugene became one of the first cities to operate a Bus Rapid Transit (BRT) system, calling it the Emerald Express (EmX) after the region’s Emerald Valley. EmX serves 28 system miles traveling between all of Eugene, the University of Oregon, and Springfield and is the backbone of the Lane Transit District public transportation service, carrying 13,000 riders a day.

Eugene has been a certified Gold Level Bicycle Friendly Community since 2013 (League of American Bicyclists) and ranks as the 5th most bike-friendly city in America.

Friday, submerse yourself in Eugene’s craft beer scene and join Oregon ITE at arguably one of the most popular breweries in Eugene (and Oregon). Ninkasi Brewing, named after the Sumerian goddess of beer, was founded in 2006 and has been rapidly growing ever since.

Saturday join members of Oregon ITE as we take a group hike to the summit of Spencer Butte, the highest point along Eugene’s ridgeline and most iconic landmark at 2,054 feet. In 2015, the upper 1,500 feet of the Main Summit Trail was reconstructed and features over 100 rock steps from imported basalt or cutting into bedrock and was awarded APWA Public Works Project of the year. The Main Trail is approximately 1.1 miles to the summit.

“A rocky and often confusing scramble to the top has been artfully transformed into a beautifully crafted and sensitively sited trail to the summit” (Kenneth Helphand, Knight Professor of Landscape Architecture at the University of Oregon)